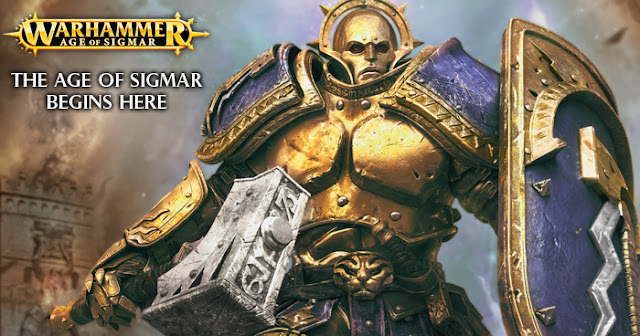 The Age of Sigmar has arrived! After 4 months of (un)believable rumours we are finally able to see if this is the savior or the executioner of Warhammer Fantasy.

I was actually looking forward to it, I usually prefer skirmish games to mass battles and the idea of one that forges a narrative™ with just 4 pages of rules was all gravy for me.

Having played some simple games with my girlfriend, watching some battlereports on youtube and trying out some isolated unit on unit tests, this is what I think about it:

It's simple, it's fast, easy to learn and easy to teach, the abilities are cool and give a nice layer of theme to the game, it's fun and I like it. The only problem is the balance that is Gwen Stefani b-a-n-a-n-a-s.

Let's dabble on the big changes (in my opinion): the Warscrolls, how units attack, magic (focus on summoning) and the (lack of) point system. Keep in mind though, that I've only started playing Warhammer since January of this year and the tests I made focus mainly on Vampire Counts (my army), so take everything I say with a huge grain of salt.

I like them, it's one of my favorite features of WARMACHINE and I already wondered if I could make something similar for my 8th edition army. It speeds up game play considerably with every stat and special rule being on the same place and thus prevents waste of time looking at the roster sheet, damage tables or rulebook/armybook.
In a more objective view of the actual content of the scrolls, I like that now every unit has abilities, but, while some of these seem to be nicely themed (like crypt horrors getting buffs from being close to a strigoi ghoul king or the Dragged down and Torned Apart Zombie rule (more on this one later)), most of them don't seem to be more than "roll some dice to cause extra wounds/heals".
I really hope that warscrolls of upcoming "proper" armies have more interesting synergies between units.

The simplification of Hit and Wound mechanics seem like a good idea if GW wanted to streamline combat. The absence of formations, also give a nice visual effect especially with horde/savage units.
I like how previously cheap core like skeletons and zombies now have model count bound abilities. It really gives that sense of "Oh crap, I don't have enough arrows for that" although I made some tests matching 40 zombies (120 points in 8th) on a 1 vs 1 unit of equal cost and they are nigh unstoppable, smashing Grave Guard, Blood Knights and Crypt Horrors like stale feta cheese.


Zen and the art of summoning

On the topic of casting magic, I went ahead and tested something that smelled kinda fishy that I noticed on the VC's warscrolls; the summoning rules.
It caught my attention that casting in AoS lacks a certain risk that was so inherently expected from magic in 8th, sure I can try to summon a terrorgheist and fail but that is an ubber elitzor terror mofo with 16% of success, but what about cheap stuff that not only is reliably good but also incredibly awesome on a lucky roll?

I setup a small table with 40 zombies against 2 necromancers (5 wounds each), 2 feet apart with a simple strategy, the zombies charge forward and the necros keep on summoning zombies (91% success for 10 new zombies, 16% for 20).
I'll admit that I got some lucky rolls with the necromancers but on average the zombies were outnumbered by the Necromancers by turn 3.

These all tie with the lack of point cost. Warscrolls don't specify model count, the way that some abilities work mean that not every model is created equal and the liberal way on how wizards can poop out whole units at a time with so little effort means that wounds, model number and 8th edition equivalences as guidelines for balanced matches is nigh impossible.

Having said that, I really have no problem at all with that, because most of what I've read of the 4 page rulebook and scrolls seem more like a toolkit or a set of templates in the veins of a D&D monster manual or gurps sourcebook than a fantasy battle system.
I might be completely wrong but Age of Sigmar feel like a framework for game masters to design campaigns and scenarios rather than a game for tournaments/casual head bash.

Granted I haven't seen the contents of Age of Sigmar box yet but I wouldn't be surprised if it contained well defined scenarios with what and how many models you're supposed to bring as well as restrictions on spells and abilities.
Yes, it takes a lot of the army customization out of the game but on the other hand, if GW (and even the community itself) releases campaigns and scenario packs in a regular fashion, we're looking at something that could be incredibly successful in the long run, I remain optimistic at least.